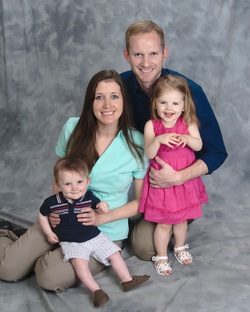 I had heard variations of these words many times, but I didn't soak in the truth of them until my first child, Emma, was born.  I was twenty-eight years old, and although I had started countless novels, disjointed pages written after being kissed by sweet inspiration's lips, I had failed to ever reach beyond the half-way mark.

But then this whimpering, pink squirming ball of wonderfulness came into my life, and as she progressed through the important milestones of her first year, I thought long and hard about what kind of role model I wanted to be for her. I knew one thing for sure; I didn't want to be a quitter.  Or the type of person who dreams big but never actually does anything. Did she quit when she wanted the black and white swirly ball that rolled out of her reach?  No, she struggled and fought and experimented with different movements until she figured out how to crawl.  So, I started crawling.

I wish I could say my story blossomed from that point on-that I typed out a literary masterpiece I was intensely proud of and shortly thereafter realized my dream of being published, but life's paths are often curved instead of straight and narrow.  Instead I took a story I had started while I was pregnant with Emma, hammered out the plot, and (ahhh!) actually finished the manuscript.  Over the course of Emma's first year, I revised it, sent it out to agents, and received some helpful feedback.

Summer came (a prime writing time for an author/teacher), and I made the somewhat painful decision to table the manuscript instead of taking it through a major rewrite.  Luckily, the elusive mistress Inspiration granted me a visit, flooding my consciousness with ideas about an alien being sent to Earth to decide if it was suitable for invasion.  At this time I was pregnant with my son Liam and wrote everyday during nap time and every evening after Emma went to sleep.  Eight weeks later, the first draft for Tales of an Alien Invader had emerged.

Being a mother is my most important job, and it always will be.  So in between going to the park, shopping trips, play dates, and story time, I'm going to write the sequel to Tales.  You know… during nap time and after the little ones go to bed.  Like I said in the beginning, perseverance, my friend, perseverance.